I love historic areas because they hold so many memories. Huntington has so much to explore. On one of my explorations I visited the Karpen House in Lloyd Harbor. Usually, I try not to bother residents but this time I was compelled to knock on the door. When I pulled up on Harbor Hill Drive, the house seemed a little buried within the trees. In order for me to get some good photos, I had to go meet who lived inside. 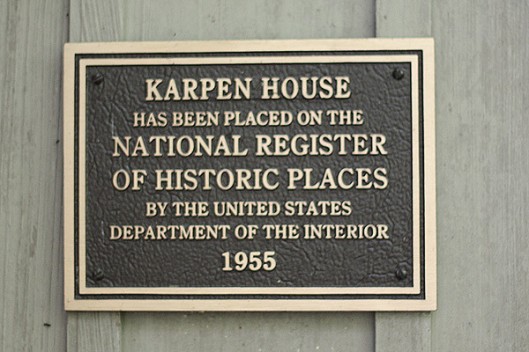 Daniel Karpen met me at the door and welcomed me inside to check out the house. He gave me tons of written materials so I had the information I needed. He was also nice enough to give me a tour of the interior and pointed out the historic elements of the home. I was really in awe of some of the original elements that remained and honestly, quite surprised they were in such good shape.

The kitchen was one of my favorite stops because I love vintage appliances. The blue General Electric oven and stove were awesome. The stainless steel sink was also never replaced. The small green house that was attached to the back of the kitchen was adorable. I would love to have one of those!

As we continued forward, I was really taken aback by some of the design choices of the architect. Since the house was built in the mid-1950s, I could appreciate the clean lines and subtle modern touches. With all the dark wood furniture and the granite fireplace, the living room held a warm and natural feeling. The original floor had been cork tile, but it was replaced with ceramic in 1961.

Its best feature? The windows. With an 11-foot ceiling, these huge thermopane beauties allowed nature to literally become part of the house. How awesome is that? 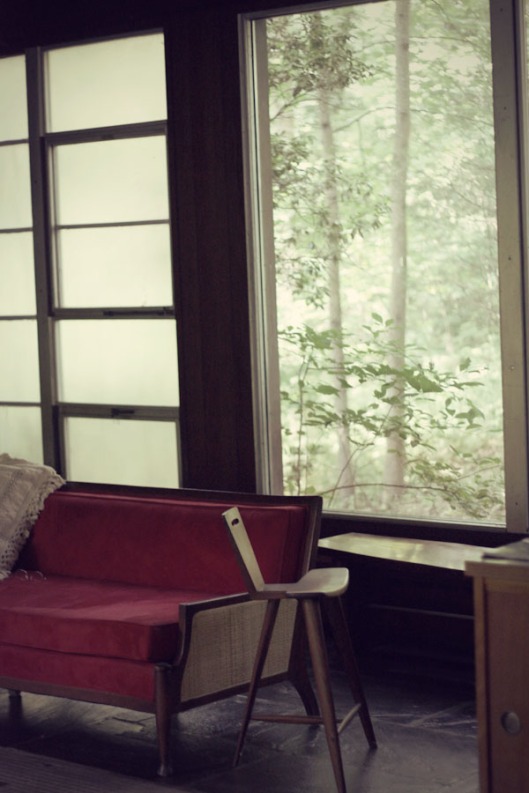 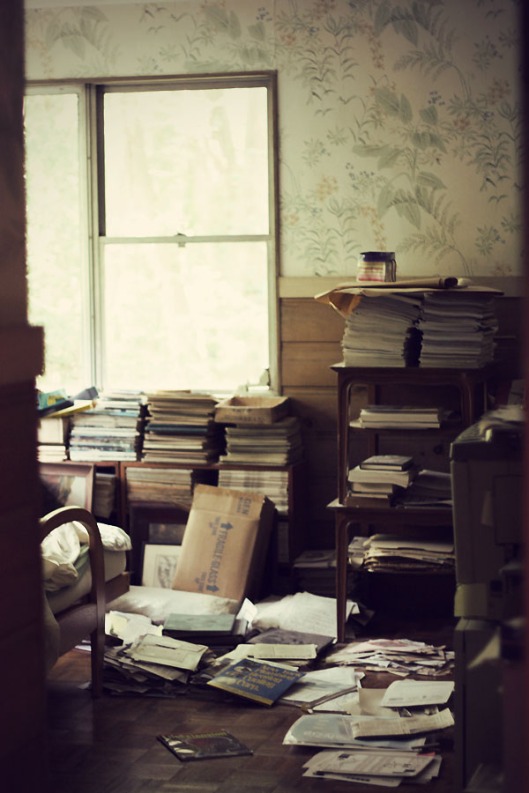 The closets throughout the house were original as well as the doors and room panelling. The basement was very unique in that it didn’t feel like a basement at all. Who ever heard of a basement with ten-foot ceilings? So unbelievably cool.

Karpen told me his father was claustrophobic so you can understand the need for space. The house also sits on a hill, so when you look out the windows its seems as if you are on the first floor. Because Karpen does woodwork and builds furniture, he has transformed the space into his studio. He has such a big wood collection, you wonder where he gets it all. I also enjoyed seeing his collection of vintage tools.

After our little tour of the inside, we walked outside to get some more photos. It was a bit tricky with all the trees but I must say it was quite beautiful. These trees are vital to the home because they give it shade which the house needs because it does not have air conditioning. Built in 1955, the international-style home in Lloyd Harbor is a long, low residence surmounted by a flat roof with overhanging eaves. The roof is also a green roof and covered in moss. Having a flat roof does have its advantages.

The Karpen House represents a vernacular interpretation of the Modern style and was added to the National Register of Historic Places in 2006. There also used to be a tree house in the backyard but was taken down in the 1970s due to the growth of the tree. That would have been really cool to see.

From first glance, the Karpen House might look a little disheveled but there are many treasures that lie within it. Karpen grew up here and now resides in the home which was designed by architect, Keith Hibner and built by his father, Morris. The main inspiration of the house was an Oregon home showcased in the 1951 issue of Architectural Record. It was designed by Pietro Belluschi who is a very well known architect.

The Karpen family was well established and Morris was very active in politics once he moved to Huntington. He was the chairman of the Suffolk County Liberal Party as well as being a part of the capital budget committee. His main source of income was his steel plant in Farmingdale where he manufactured steel doors and frames, some of which you will see in the home itself. Once he moved to Asheville, N.C., in 1977 the plant was run by his son Seth and business partner Harold Kardeman until 1995 when it was sold. Morris passed away on March 3, 2002 and his daughter Rachel now runs the plant located in Weaverville, N.C.

You see, in all the many houses of Huntington here is one that really helped the world evolve. It housed smart individuals that really made a difference and contributed a good amount of time, effort and knowledge to their community. Not only does the Karpen House exude style and functionality, it continues to tell the story of the family who created it. The fact that it’s still standing today proves to all of us that love is the master of time and with a little TLC and memories by your side you can keep anything alive.