The Southard homestead was a center home for most of their generations still stands today. You can find the Southard Homestead on Bellmore Road looking timeless as it always has. Owners Albert and Mary Waring have done such a great job at keeping this piece of history alive. 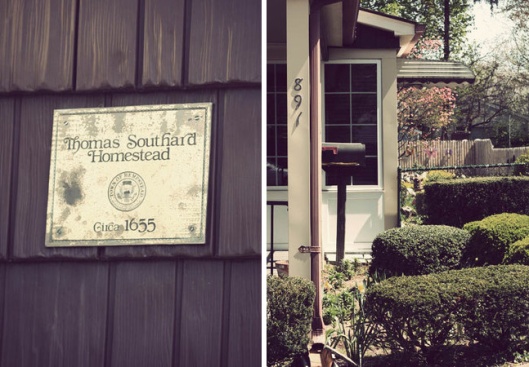 The home was built in 1655 when Thomas Southard came from the Netherlands to purchase land. His 214 acre farm was the building block of the future communities. The house still contains its original timber construction. Before the 1800s, the tenon and mortise style of construction was very popular and this home is a true example of how successful that method was. It was widely used by stonemasons and blacksmiths as well.

There were obvious additions made to the house over the years, but the original portion still remains. The two story building contained three rooms; a kitchen, living room and an upstairs bedroom. It also has its original beams and fireplace.  The old cemetery that sat on the land was given to the town and most of the original acres of land were sold off.

The Southard family has a long line of descendants that date back to the English name Southworth. Thomas was the first son to come to the states in 1650 and settled in Long Island. He married Annica Jensen in 1653 when he was in his late 30s. She was almost 10 years younger than him and was of Moroccan descent.  They later had eight children, one being Sarah Southard who married David Bedell. You could imagine having eight children would be a good start to stretch the family name.

Eleven generations of the Southard family has lived in this historic landmark.  This important part of Bellmore history stands proud and beautiful and still gives residents a place to call home. To think that the original descendants of Bellmore built and lived in this home is amazing. We should all appreciate the bits and pieces of our history because what was then will always reflect what is now.