The Old First Presbyterian Church of Huntington was originally organized in 1658. At the time it was considered a congregational church with its first minister being the Rev. William Leverich. In addition to working with the church he was also the town’s first miller. He came to Long Island with a small group of men from Sandwich, Massachusetts and bought Oyster Bay from the Matinecock Indians. Later they purchased Huntington as well.

Built in 1665, the church location was called Meeting House Brook, what is now Prime Avenue. According to Duke’s Laws it was mandatory to have a house that can be used for public worship and it had to hold up to 200 people. So in 1715, it was decided that a new church building would be built on the East Hill on Main Street.

Rev. Leverich retired in 1669 and Rev. Eliphalet Jones, a Harvard graduate, took over from 1676 to 1723. After he did his time, Rev. Ebenezer Prime took his position up until 1779 when he passed away. He was a Yale College graduate and came to Huntington in 1719 as an assistant to Rev. Jones. 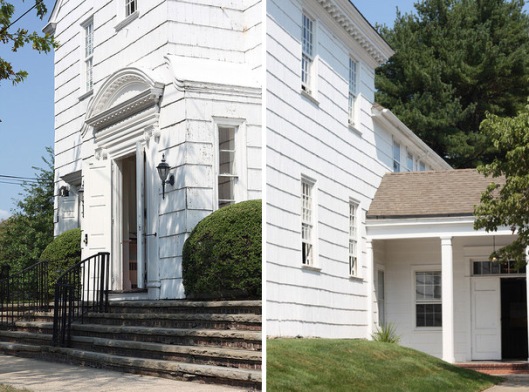 During the Revolutionary War the church building was seized by the British and eventually was dismantled so its parts could be used to build a fort on the Old Burying Ground. Its bell was also taken and used on British warships. However, it was found in 1783 on the ship Rinoceros and had to be recast before it was able to be used for service.

That year the Huntington residents started to reconstruct the church on 125 Main Street where it sits today. The two and one-half story building has a pitched gable roof and five-story bell tower in the center of the structure. Under the bell tower is where the main entrance stands.

During the 1900s, the addition to the two story, five-bay gabled roof was added to connect the back of the building. Later in the 1970s the parish hall was built as well as the four-bay hipped roof on the west side.

The building is dressed with white wood shingles, multi pane windows and many classic decorative details such as its modillion cornice which surrounds the edge of the roof and the elaborate work above the main entrance. Also take note of its lunette windows which is a nice contrast to the rectangular shape windows that are used throughout the structure.

The First Presbyterian Church expresses a New England colonial style that was mostly used for religious architecture.  I happen to love the bell tower due to its height and slim design.  It looks beautiful against the tones of the blue sky. 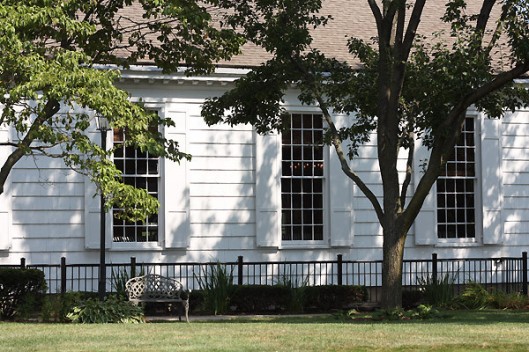 For over 300 years, the church has seen unbelievable change but stands today spreading a message of hope and faith. It gives the town a sense of community and provides it with a gathering place for all.   With the ring of its church bell every Sunday you can count on that feeling of togetherness and love, all year round.