This month I have decided to put Color in Films to rest. It has been a great year exploring my favorite films in this way and I am happy my readers have enjoyed the color palettes. They have certainly paved the way for more ideas I know you will all love. Thanks again for your support!

You can continue to view all the palettes I’ve created on the Color in Films page.

I think when my generation first watched the film Kids, we felt like someone understood us. Although it a lot of people had issues with the context, it wound up grossing millions at the box office and becoming a favorite for teens all over the world.

Written by Harmony Korine and directed by the one and only Larry Clark, Kids gives you a sneak peak into the lives of a group of kids living in New York City. The story focuses on the rising HIV epidemic in the mid 90s and how young people continued to be irresponsible about sex. As nature takes its course, reality hits after one of the girls learns she tested positive for HIV and she searches for the boy who gave it to her. Watching this unfold through the characters gives you a sense of sadness and allows for a special kind of empathy towards this particular generation.

Filmed in a documentary type style, Larry Clark did an amazing job at capturing New York City street life and how kids saw the world at that time. I am personally part of this generation and know first hand the scene and style of the film. The characters were all played by first timers, most of which were just city kids with no experience, who we all know now to be rising actors in the field. Kids started the successful relationship between Clark and Korine, who have continued to work together on other films such as Bully and Ken Park.

The color palette for the film is pretty much as true as it gets. The dark neutrals of the city streets with the accent of nature inspired hues from local parks and greenery. The pops of color come through by the wardrobe of the characters and various storefronts in certain scenes. Exploring the everyday issues and hardships of generation x as well as the unbreakable feeling most of us felt when we were young in such a straightforward way was truly a sight to see. All in all, the film was a breaking point for story telling, giving all of us kids a voice to be reckoned with. 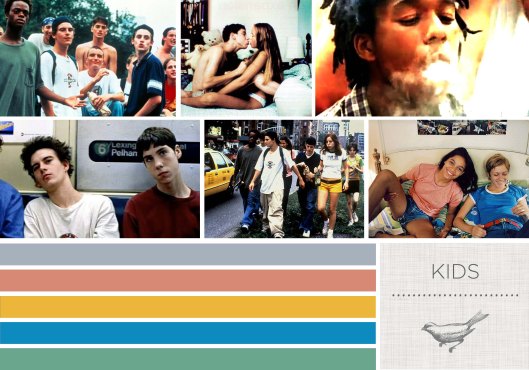 There’s nothing like a good 80s film to bring you back to crazy filmmaking. Howard the Duck is definitely one of those pictures that is way out there, but how can you resist? Released in 1986, the film was based off the Marvel comic of the same name. Sadly, it received bad reviews at the time. However, I feel its one you shouldn’t miss.

The story starts in Duckworld, where Howard lives. One night while relaxing and reading the paper, he suddenly gets blown out of his apartment into the universe, and then lands on Earth, ending up in Cleveland, Ohio. As he arrives, he witnesses two guys attacking a girl and helps her. The victim, Beverly, takes him back to her place to stay as a thank you for saving her. He explains his story and she says she will try to get him back to his planet.

After meeting with a lab assistant they thought was a scientist, Howard thought it was useless so he started getting comfortable on Earth. He gets a job at a spa which he winds up quitting and then later becomes the manager of Beverly’s band, Cherry Bomb, after he learned their previous manager was no good for them. Eventually, scientists visit them and share answers as to how Howard got to Earth. From there the journey begins to get him back home but disaster happens when something goes wrong and evil creatures are brought into the picture. In the end, it all comes to a decision to go home back to Duckworld or stay on Earth and protect it from harm.

A wacky science fiction story it may be, but unique and funny as well. The color palette is one of brighter hues, explored through 80s fashion and decor. Boy, have times changed. You will find all colors of the rainbow in this one. 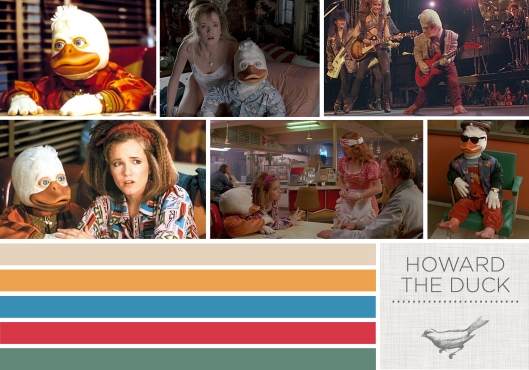 I recently saw Oz The Great and Powerful and my excitement was seriously justified. I was in awe of the characters and art direction and simply loved the story. What a beautiful and mesmerizing film, to say the least. Director Sam Raimi did a fantastic job at capturing the beauty, amazement, and fantasy of Oz and all that it encompasses. I was highly intrigued and surprised as the story unfolded.

The film tells the tale of how the great Oz came to be. Oscar Diggs, a man who once was a sideshow magician and conman, becomes a strong leader and caring individual. Learning of the good that had always remained inside him, he takes on a journey that even he can’t believe. Landing in Oz, by way of tornado, he meets various characters that will soon become his friends. From flying monkeys and fairies that bite to porcelain dolls from chinatown, this film will truly keep you wanting more.

The landscape itself is a main character. With its vibrant hues and unique personality, the land of Oz comes alive right before your eyes. I wish I could go there just for a day to witness the true magic it clearly has. It set a colorful and interesting backdrop for the story and really creates the fantasy driven reality we all love. From emerald green to the bluest of skies all the way to the darkest of grays, the rainbow is clearly shown through every viewpoint.

In the end, Oz saves the day along with all the great people who call the land of Oz home. With teamwork, bravery, and goodness, they take on the wicked witch and all is happy again. I thought the story was clever, smart, and fun. A nice way to introduce the Wizard of Oz for sure. This girl loved every minute of it.