The Avengers is an action packed film starring the best of the best from the Marvel world. With the Hulk, Captain America, Thor, Iron Man, Hawkeye, and Black Widow, its awesome to see all on one screen together kicking ass and saving the planet. Each of the characters are interesting in their own right so to have them work together was surely a treat.

It starts by Nick Fury, S.H.I.E.L.D, contacting each character to help out with the problem at hand, which is to stabilize the Tesseract and figure out what to do with Loki, Thor’s evil twin who has now entered Earth through a wormhole the Tesseract mistakenly opened. Eventually, Loki gets captured but does find a way to escape, so the adventure continues.

The wormhole ends up being a huge problem because what lies in Asgard on the other side, is able to come through to Earth. So, the Avengers get to work to battle it out and close the wormhole for good, all within the confines of New York City. It’s a majestic and  explosive ending for sure.

The color palette is what we know of the characters and their outfits along with city neutrals and nature inspired hues. The five elements are surely explored in the film. Expect to see bold and bright colors that are weighted down by earthy grays and browns. A nice even playing field for pigment to shine. 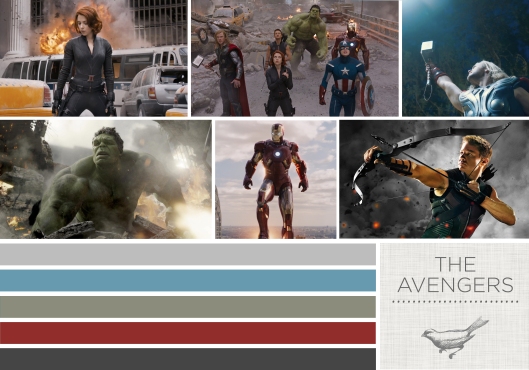